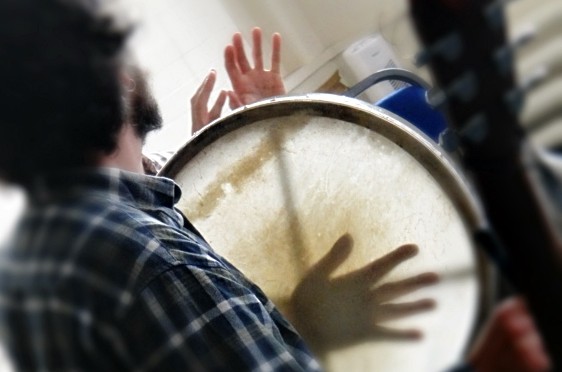 Five years ago, during my initial training as a musician in healthcare settings, one of the first challenges I faced was how to take my specialism of percussion into hospital settings. How could I use percussion instruments, particularly drums, in spaces that I assumed would be very quiet in a way that would enhance that environment? How could I use something as potentially noisy and intrusive as a drum in an a space populated by children suffering from a variety of illnesses or conditions which are unknown to us and doctors and nurses doing a job that required great concentration and accuracy? After having spent 10 years playing in a variety of loud percussion based bands and running drum circles and percussion workshops, I couldn’t see how a drum would do anything other than disrupt a hospital space, over excite or disturb patients and distract doctors and nurses. At that time the thought of taking a drum into a hospital ward seemed like a bad idea and if the possibility of taking one into an intensive care unit had been raised it would have seemed ludicrous.

In the last couple of months I’ve had cause to remember and reflect on my initial thoughts and reactions to drumming in hospital.

The first occasion started with walking into a children’s intensive care unit in a large hospital in the East Midlands. The unit has about 10 beds in it with only a few feet in between each bed to allow access for nurses, parents etc. The feeling on the ward is quite enclosed and cluttered due to the large amounts of medical equipment around each bed and the large numbers of staff attending the patients.

I was working with two colleagues, Sarah on fiddle and Marc on guitar. We had been requested by a parent to come and play music with her little girl who was about two years old. The little girl, who we will call Lisa, had special needs, no speech and had recently had a tracheotomy, so she couldn’t make any sounds at all with her voice.

When we arrived Lisa was sitting up in bed and her mother was at the bedside. Marc started playing a nursery rhyme and her actions and facial expression showed that she was immediately responding positively to the music. Her mother reinforced our reading of this response with positive comments and an increase in engagement with Lisa. We continued to play, with Marc leading the interactions and encouraging Lisa to shake along or engage with the animal toys around her bed. I changed from accompanying a lullaby on ukulele to playing a deep quiet and steady beat on the bodhrán on the next song. As I did so I noticed a shift in Lisa’s focus towards the drum so I asked Marc to make some space so I could get to the bed.

I knelt down at the bedside and asked Lisa’s mother if I could place the drum on the bed so she could see it and hear it more clearly. I continued to tap along on the drum as we sang, just keeping a gentle pulse and as I did so Lisa leant forward and started touching the drum skin. She was exploring how it felt, sometimes tapping it and sometimes just leaving her hands on the skin to feel the vibration as I continued to tap the drum. Sometimes I copied what she did on the drum but she seemed to be getting the most pleasure from experiencing the vibration from the skin as I hit it. She moved from having both hands on the drum, to both hands and one foot on the skin, to putting both hands, one foot and her face pressed against the drum as I continued to gently tap the pulse of the song that was being played and sung by all the musicians.

Once Lisa had become used to the sensation she decided she wanted to find out more about this object so she started to try and move it around. I responded to her attempts to move the drum, moving it for her in the direction that she was trying to get it to go. She turned the drum around and put her hands inside it. She tapped inside the drum and left her hands on the skin as I played the other side. This continued for at least 5 minutes after which time Lisa started to get tired which she showed by simply disengaging from the drum and leaning backwards onto her bed.

All the way through the interaction was accompanied by beautiful music and songs from Marc and Sarah. As Lisa was exploring the drum and interacting with me, a group of nurses and doctors had gathered to look at what was happening. From their comments and faces they all seemed to be really enjoying the opportunity to see their little patient behaving like a normal child enjoying her exploration of her environment.

The second instance of drumming in ICU was in a different large hospital in the East Midlands. This time a nurse said it would be ok if we went into a side room where a young toddler, we’ll call him Mohammed, was standing in his cot. His mum was in the room with him and the TV was on with the volume turned up. After saying hello to them both we checked with the boys mum if they would like us to play. They had already seen us playing in the main part of ICU so we felt like they would understand what we might be offering. When Mum agreed we asked if we could turn the TV off. Once we had done this we had Mohammed’s full attention.

As soon as we started playing he was jiggling around to the music and wiggling about holding onto the bars on his cot. He also had a tracheotomy and was attached to oxygen through that. I was surprised at how much energy he had and how little the tracheotomy and the oxygen tube hindered his enjoyment or compulsion to move. He was really grooving and smiling. We gave him a shaker and he quickly learnt the ‘throwing the shaker out of the cot’ game so I approached him with my drum. His response was very similar to Lisa’s. His hands were immediately on the skin and again rather than his focus being on hitting the drum himself he seemed to be enjoying feeling the vibration through the skin. Mohammed too was intent on exploring the drum, constantly turning it around and around so he could feel it inside and out. The drum must have seemed enormous to him, as he was only just taller than it’s diameter. Once he got the hang of how to get a sound from the drum he started really enjoying the loudness of the instrument and as we were in a side room I was able to allow him to really get into this, knowing that the volume outside the room wouldn’t be distressing to other patients and staff. As he started to lose interest in the interaction I refocused my playing of the drum to join back in with the tune that Sarah had been playing throughout the interaction and so we were able to leave the room in a musical way with Mohammed having played his part in some great interactive music making while learning about and experiencing a person sized drum!

In order to use a bodhrán in hospitals I’ve had to develop my technique so that I can play very quietly whilst maintaining accuracy and positivity. I’ve also had to develop and change my musicality to think about how I use the drum to accompany song. Traditionally the drum is used to add drive to tunes and to bring out the rhythm and shape of tunes. There can be a lot of ornamentation used in bodhrán playing and I often choose to strip much of this away so that I focus on the essence of the rhythm of the song or tune, focusing on groove more than the shape of a tune. I always try and keep in mind that my focus is on playing for the space and the person rather than for my own enjoyment. The drum I have has a very rich bass end and even the top end is mellow sounding. This enables me to play with a variety of dynamics without bringing in any harshness to the sound. It has been my experience that choice of instrument is very important when using percussion in hospitals. My preference is for warm sounding drums that can be played to obtain a variety of pitches. The other factor that I’ve had to consider is the weight of the drum. The bodhrán is often played sitting down, so walking around a hospital for a day carrying the drum also presented problems. I fitted a strap to my drum and this has helped a great deal.

When using the drum for interactions there are number of things to bear in mind, not least of all the potential volume of the instrument and the impact that this can have on the space around. There is a lot of satisfaction and a sense of power to be gained by a child when they hit a drum hard and get a loud sound in response. It’s a great thing to allow this but the musician also has a responsibility to their surroundings and the other people in the space. Sometimes it’s not a problem to allow a child to make a lot of noise, sometimes it’s ok once or twice but then the volume needs to be managed. Other times a loud noise is not appropriate. I dampen the drum with my hand, use explicit verbal instructions or offer beaters with softer heads in order to manage the volume of the drum. If volume is becoming an issue I also try to refocus onto rhythm, pattern or copying.

I’ve come to realise that there is no problem with bringing and playing drums into the most sensitive of environments. My skepticism at the start of my training was rooted in the way I was seeing drums, thinking about them and relating to them at the time. The power of drums to transform mood, empower people, to facilitate communication and connection and to bring joy seems consistent in all situations. This power is not constrained to the volume or complexity of what is played. It’s up to the drummer to learn and then decide how to best use the drum to the maximum benefit in any given circumstance. Working with drums in hospitals has given me a great faith in the efficacy of what I do as percussionist and inspires me to explore the huge potential of drums still further.